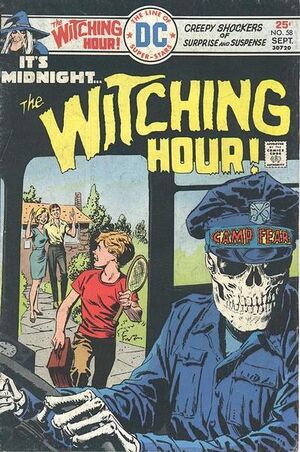 A young boy attends a summer camp run by satanists.

Appearing in "The Witch of Raven's Pass"Edit

Synopsis for "The Witch of Raven's Pass"Edit

A man wishes to kill his neighbors so that he can get ahold of their land and thinks that he can get a witch to use black magic on a photograph of the three of them to kill the two he wants dead. He mistakes an old woman for the local witch, and shoots her when she refuses to perform any spell. As she falls dead, she knocks over a candle which begins to set fire to her cabin. The man has carelessly left the photo in the cabin and returns to his car. When the fire reaches the photograph, he has an accident and is burned to death. He never realizes that his intended victims were the true witch of Raven's Pass and her husband, and that she had placed a hex upon him.

Appearing in "Who Stalked by Night"Edit

Synopsis for "Who Stalked by Night"Edit

A criminal dons a skull mask in order to mug people thinking the scary aspect will be so startling that it will prevent them from shouting for help. When the police tail him back to his apartment and he removes the mask he confronts the police unaware that his face now resembles the mask he just removed.