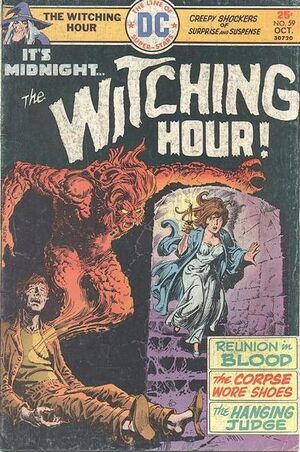 Appearing in "Reunion in Blood"Edit

Synopsis for "Reunion in Blood"Edit

A family servant kills the last carrier of the monster-seed.

Appearing in "The Hanging Judge"Edit

Synopsis for "The Hanging Judge"Edit

A convicted man breaks jail one hour before he is scheduled to be hanged and murders a man he meets in an attempt to steal his car. He can't locate the car keys and is apprehended by the police and executed on schedule. It turns out the man he killed was a messenger from the governor with a stay of execution that now lies unnoticed among the grass.

Appearing in "The Corpse Wore Shoes"Edit

Synopsis for "The Corpse Wore Shoes"Edit

When a tornado passes through the hired girl locks the lady of the house outside the storm cellar and she is killed. She plans to marry the dead woman's husband and succeeds, even taking the dead woman's shoes from her casket. A flood comes up and washes the casket out of the fresh grave and it bumps against the door of the cabin. The children think that their mother wants her shoes back, but their stepmom refuses to part with them. The casket is reburied, but then an earthquake dislodges it and it slides down the hill, the lid opening and the corpse inside popping up until it reaches the cabin. The family is seriously creeped out, but still the stepmom refuses to part with the shoes. The third time the casket shows up the stepmom goes insane and the corpse finally gets its shoes back.

Retrieved from "https://heykidscomics.fandom.com/wiki/Witching_Hour_Vol_1_59?oldid=1468072"
Community content is available under CC-BY-SA unless otherwise noted.