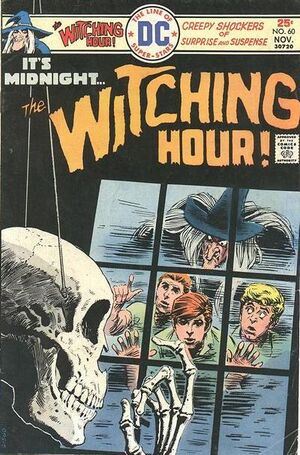 Appearing in "The Body in Cold Storage"Edit

Synopsis for "The Body in Cold Storage"Edit

A woman's brother kills a man and puts the body in a freezer. Rather than phone the police, she convinces her husband to ditch the body. They attempt to do so several times, but the zombie doesn't stay put. They finally return to their house after several drinks, where the zombie is waiting for them having stuffed the brother in the freezer.

Appearing in "Over Your Dead Body"Edit

Synopsis for "Over Your Dead Body"Edit

An old death mask maker resents a young man who starts taking business away from him so he decides to poison him and make a mask of his dying moments on Halloween evening. While he is preparing, young children enter his intended victim's shop and borrow the death masks on display in order to do their trick or treating. The old man sees the children fleeing in the darkened shop and jumps to the conclusion that his masks have come to life, while the intended victim uses the distraction as an opportunity to summon authorities. When he returns with the police, he finds the old man was so unnerved by the sight of death masks running around that a heart attack was triggered and he spent his final moments crafting his own death mask.

Appearing in "Time to Kill"Edit

Synopsis for "Time to Kill"Edit

A soldier is caught stealing so he shoots the man and frames another for the crime. They are going to execute the man on circumstantial evidence and the guilty party bribes the officer in charge to give him the live round in the firing squad so that he can ensure his fall guy never has a chance to convince people of his innocence. The live round misfires when the command is given, mortally wounding the killer, prompting a confession which frees the condemned soldier.

Retrieved from "https://heykidscomics.fandom.com/wiki/Witching_Hour_Vol_1_60?oldid=1468074"
Community content is available under CC-BY-SA unless otherwise noted.