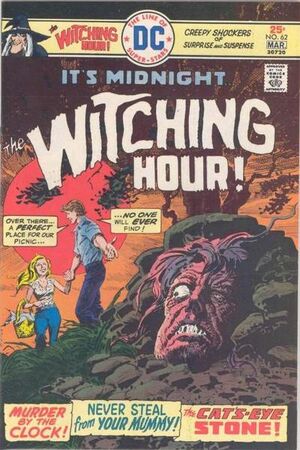 Appearing in "Never Steal From Your Mummy"Edit

Synopsis for "Never Steal From Your Mummy"Edit

A man regrets stealing a jewel from an Egyptian mummy for his new bride, as when she dons it at their wedding and lifts her veil, her skin has become as rotten as the mummy.

Appearing in "The Cat's Eye Stone"Edit

Synopsis for "The Cat's Eye Stone"Edit

A man secretly oversees a witch constructing a curse and schemes to acquire her cat's eye stone so that he can gain power over the townspeople after the witch is dead. He incites the folk into a mob and kills the witch with a thrown rock. Before she dies, she curses him that he will share her grave. He goes out later to dig up the grave the townspeople have buried her in so that he can get the cat's eye stone, but her corpse seizes him and drags him into the grave.

Appearing in "Murder by the Clock"Edit

Synopsis for "Murder by the Clock"Edit

A killer condemned to be hanged bribes the operator of the town clock to lie about the clock having the wrong time on the night of the murder so his execution will be called off, but the ghost of the victim threatens the operator with death if he doesn't set the clock eight minutes forward so that the killer is hung before his reprieve gets through eight minutes before midnight.

Retrieved from "https://heykidscomics.fandom.com/wiki/Witching_Hour_Vol_1_62?oldid=1468078"
Community content is available under CC-BY-SA unless otherwise noted.