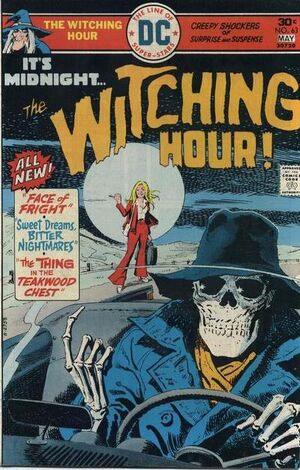 Appearing in "Face of Fright"Edit

Synopsis for "Face of Fright"Edit

A wealthy man accepts responsibility for a disfigured child orphaned by the deaths of his stablehands. He comes to resent the boy's relationship with his daughter, but she loves him and wishes to be his wife. She collapses when her father threatens to whip the boy and the doctor proclaims she needs a rare transfusion which only the boy can provide. The father thinks that he can deal with him after he provides the needed blood, but is shocked to find that the successful transfusion has disfigured his daughter who is now happy she can marry her love.

A woman finds herself unable to dream so she visits a psychologist who suggests she must have had a nightmare which is preventing her from dreaming. When a burglar enters through the window, at first she thinks the events are a dream and she is finally able to dream again, but after she gets out of bed and fights him off she recalls that last year a mugger had threatened her. With the realization of why her dreaming was blocked, she knows that she will be able to dream from now on.

Appearing in "The Thing in the Teakwood Chest"Edit

Synopsis for "The Thing in the Teakwood Chest"Edit

A thief steals a box thinking it contains money but when he looks inside it he sees that it contains a severed head. He tries to get rid of the box but it continues to reappear until, being pursued by the police, he falls onto the subway track and is decapitated by the subway car. The police return the box to the miser and when he looks inside he sees a photograph of the family he might have had if he had not valued money more just as the box attempted to warn the thief of his impending fate.

Retrieved from "https://heykidscomics.fandom.com/wiki/Witching_Hour_Vol_1_63?oldid=1468080"
Community content is available under CC-BY-SA unless otherwise noted.