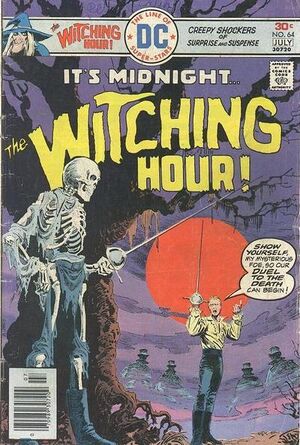 Appearing in "The Mark of a Murderer"Edit

Synopsis for "The Mark of a Murderer"Edit

A student who challenges another to a duel cheats and has a friend knife his opponent in the back. The ghost gets revenge by carving the letter 'M' into his forehead so that everywhere he goes, people know that he is a murderer.

Appearing in "Mirror of Madness"Edit

Synopsis for "Mirror of Madness"Edit

A man murders a gypsy in order to steal her mirror which reveals a person's inner thoughts so that he may steal another man's wife away from him. When he trains the mirror upon his rival he discerns that his rival plans to shoot him in his bedchamber so that it appears the work of a thief. He decides to wait for him with a gun in order to shoot him and claim self-defense, and it works, but his intended victim gets off a shot which shatters the mirror and sends a shard into the killer's neck so that both men are found dead in the morning.

Appearing in "My Mother Was a Witch"Edit

Synopsis for "My Mother Was a Witch"Edit

A girl's mother is believed to be a witch and visited by child protective services since a witch would be considered an unfit mother. They leave the child with the mother as they are afraid of her, but after the mother dies, the child is placed with child protective services. Her father tracks her down after learning of the situation since the reason he left the family was that he was a warlock and didn't want to draw attention. It turns out that the girl's mother was present whenever strange phenomena occurred because the girl herself was the witch and the mother wished to distract attention in order to protect her.

Retrieved from "https://heykidscomics.fandom.com/wiki/Witching_Hour_Vol_1_64?oldid=1468082"
Community content is available under CC-BY-SA unless otherwise noted.