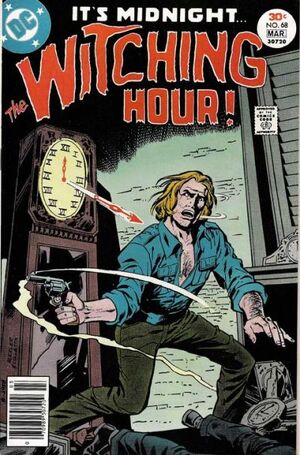 Appearing in "When Time Ran Out"Edit

Synopsis for "When Time Ran Out"Edit

Two thieves beat an old clock maker to death. He curses them that they will die when all the clocks stop. One man is electrocuted by a clock and the other attempts to keep a grandfather clock wound, but the hand detaches itself from the clock face and launches itself into his forehead like a crossbow bolt.

Appearing in "Lam to the Slaughter"Edit

Synopsis for "Lam to the Slaughter"Edit

A scientist performs a lightwave experiment which releases an alien creature determined to silence him.

Appearing in "Young Man in a Shroud"Edit

Synopsis for "Young Man in a Shroud"Edit

A corpse with its face blown off causes some confusion when the killer puts his sports medal upon the body. The father of a boy he thinks has committed the murder believes that the body is that of his son's victim as he knows there is a family feud between his family and the boy who won the sports medal. The father steals the body from the morgue in order to get rid of it to protect his son. The sheriff starts to believe the same thing as the father and pursues the father as the father drives into the woods to warn his son to hide from the law. As the father and sheriff approach the man on the hill they realize he is the son's intended victim and the father has his son's body in the back of the car. The father mourns his son.

Retrieved from "https://heykidscomics.fandom.com/wiki/Witching_Hour_Vol_1_68?oldid=1468089"
Community content is available under CC-BY-SA unless otherwise noted.