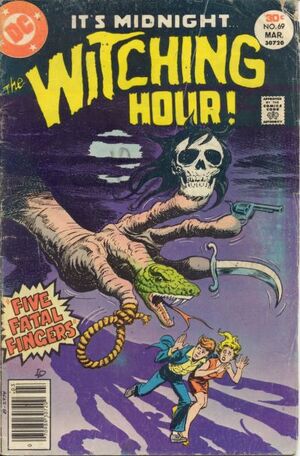 A man accepts a witch doctor's curse because it will give him eternal life if he can keep draining the life force from other living things through his fingers. Neighbors sense his evil and threaten to shoot him unless he moves. He removes his gloves to defend himself and his wife throws herself in-between the gunman and her husband, glancing his hand. Within moments, she rots away to nothing. Remorseful, the man allows his stored life force to drain away so that he dies at last.

Appearing in "The Captain's Curse"Edit

Synopsis for "The Captain's Curse"Edit

A sailor sickened by leprosy is betrayed by his friend who murders him and buries his body in a lilac field so that he won't have to pay him the money he owes him. The killer brings his girlfriend contaminated lilacs through which they contract leprosy.

Appearing in "The Girl Who Grew Younger"Edit

Synopsis for "The Girl Who Grew Younger"Edit

A girl comes into a million dollars on her twenty-first birthday and wants to marry a man that her family disapproves of, so she hires a series of girls of different ages to make the family believe she is growing younger until she disappears entirely. This way, she gets to marry the man shes loves, and her family will not search for her as they believe she no longer exists.

Retrieved from "https://heykidscomics.fandom.com/wiki/Witching_Hour_Vol_1_69?oldid=1468091"
Community content is available under CC-BY-SA unless otherwise noted.