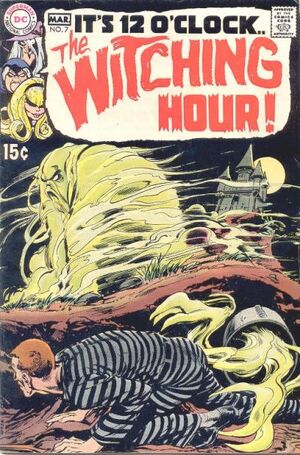 Appearing in "The Big Break!"Edit

Synopsis for "The Big Break!"Edit

A convict escapes from jail but learns he is the victim of a curse which proclaims death if he does not remain in the house of his ancestors.

A gangster wants an artist to paint his portrait. The artist insults him and the gangster knocks the artist out and flees the artist's studio where the artist had created a statue in his own likeness. When the gangster is back at his flat he is terrified to hear the heavy stone steps of the statue pursuing him. The statue strikes him and when he wakes up the artist is there in the flat with no memory of how he got there. The immobile statue in the gangster's flat bears an uncanny resemblance to the gangster.

Angels leave their child at an orphanage hoping that he will learn about human love, but it doesn't work out so they return for him.

Retrieved from "https://heykidscomics.fandom.com/wiki/Witching_Hour_Vol_1_7?oldid=1467974"
Community content is available under CC-BY-SA unless otherwise noted.