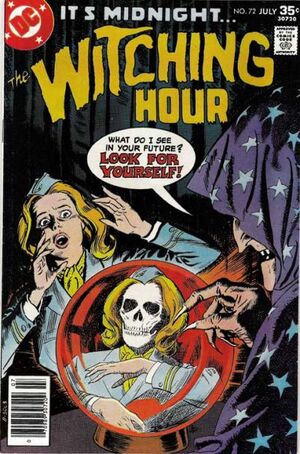 Appearing in "Coffee, Tea... or Kill!"Edit

Synopsis for "Coffee, Tea... or Kill!"Edit

A stewardess believes that she is a plague carrier, but it turns out her pilot boyfriend is.

A man abroad saves an old sorceress from death, and is obligated by local custom to care for her. He brings her back to the states, where she ends up tormenting the man and his wife for eternity.

Appearing in "You Dare Not Bribe the Dead"Edit

Synopsis for "You Dare Not Bribe the Dead"Edit

A rich man attempts to funeral pyre the corpse of a man he murdered. He ends up burning and mutilating his own flesh in the blaze. He spends the rest of his life trying to atone for his sin by bribing the spirit that haunts him with his assets.

Retrieved from "https://heykidscomics.fandom.com/wiki/Witching_Hour_Vol_1_72?oldid=1468097"
Community content is available under CC-BY-SA unless otherwise noted.