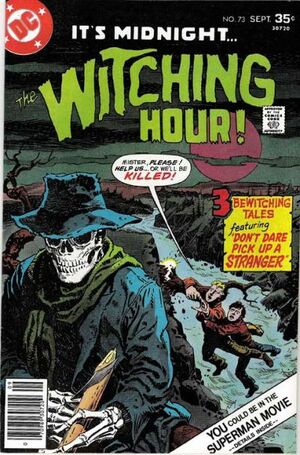 Appearing in "She-Devil in Paradise"Edit

Synopsis for "She-Devil in Paradise"Edit

A bank clerk steals a gem from a mystic which turns her into a glamour girl at midnight who lives a party lifestyle. The mystic threatens to expose her as a thief, so she tracks him to his house where he keeps a pet tiger. She knifes the man, enraging the tiger, which claws up her face. She is frightened that when she changes back to her plain self at dawn she will remain disfigured so she smashes the gem. With the gem destroyed, she becomes her normal self without scars. She thinks that she has gotten away with murder until her first child is born with a clawed up face.

Appearing in "The Crime of Your Life"Edit

Synopsis for "The Crime of Your Life"Edit

A Chiromancer (Bartolomeo) receives an invite to palm-read the sovereign of Bologna. After dishing the majesty a grim and exiled prophecy, The King goes irate and decrees the execution of the honest Bartolomeo.

Appearing in "Don't Dare Pick Up a Stranger"Edit

Synopsis for "Don't Dare Pick Up a Stranger"Edit

In a rocky wooded area, three lads scram after a strange man lurks about. Two of the boys fall off a bluff to their deaths. Feeling compassion for the boys, the third kid (Gil) beseeches father death to spare their souls in exchange for his. At first reluctant to alter fate, Death restores the boys' lives and claims a willing Gil as his new trainee.

Retrieved from "https://heykidscomics.fandom.com/wiki/Witching_Hour_Vol_1_73?oldid=1468099"
Community content is available under CC-BY-SA unless otherwise noted.