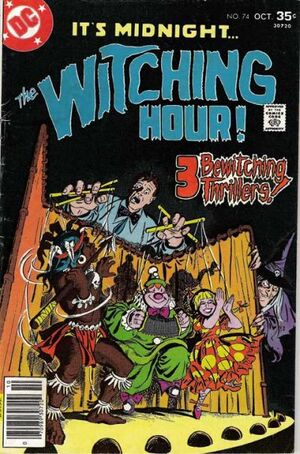 Appearing in "A Tiny Bit of Torment"Edit

Synopsis for "A Tiny Bit of Torment"Edit

An unsuccessful puppeteer comes across a tribe in the Amazon who have shrunk to doll size by drinking the water there. He captures them and forces them to work in the successful puppet show he now puts on. They escape, and he tracks them back to the Amazon. He drinks the water, and when he locates them, finds that he has shrunk to their size.

Appearing in "Death Can Be Contagious"Edit

Synopsis for "Death Can Be Contagious"Edit

Disguising her figure with anti-aging potion, a hideous witch (Myra) gives a portion of youth elixir to her lover (Drew Latham), with the stipulation that he stays with her everlasting. In Betrayal, Drew jilts Myra soon after the oath, and begins dating damsels around town. Breaking the agreement brought a hex upon Drew, causing all his lovers to die from the touch of his lips. Eventually the potion wears off. In desperation, Drew breaks into Myra's pad to steal more. When confronted by Myra, Drew shuns her sorrow sentiments in a vain arrogance, and kisses his own reflection in a mirror--resulting in his rotting doom.

A man and his wife set out to murder one uncle and drive the other feeble-minded uncle mad in order to gain control of a mine. They think they have succeeded in causing a cave-in which killed the one uncle, and plan to fake a ghost to play upon the feeble-minded uncle's guilt, but the uncle survives the cave-in and turns the tables upon them. By the end of the story the wife ends up shooting her husband and is taken away to an asylum.

Retrieved from "https://heykidscomics.fandom.com/wiki/Witching_Hour_Vol_1_74?oldid=1468101"
Community content is available under CC-BY-SA unless otherwise noted.