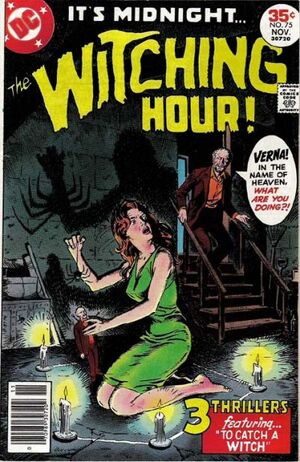 Appearing in "To Catch A Witch"Edit

Synopsis for "To Catch A Witch"Edit

A professor finds his wife practicing witchcraft and believes her story that she has the sense someone is trying to kill her. He drives to an old witch in a shack and finds she has a doll in the image of his wife. He threatens her and leaves but she protests that she was trying to save him. It turns out the man's wife is attempting to kill him with witchcraft.

Appearing in "The Night Time Stopped"Edit

Synopsis for "The Night Time Stopped"Edit

A thief has heard that if he neglects to wind the clock in the town square, none of the other clocks will work and no one will wake, so he resolves to rob the town. When he is arrested and put in jail he remembers that he forgot about the town's sundial.

Appearing in "Crazy for the Kill"Edit

Synopsis for "Crazy for the Kill"Edit

An inmate who was unjustly committed to an asylum escapes so that he can extract a confession from his relatives who had him put away in order to inherit his estate. After weeks of applying electroshock therapy, forced medication and other torments to his relatives they find a secret passage that leads to freedom and attempt to escape across the lake. The boat capsizes and the escaped inmate appears on the shore with a lifeline but demands a confession. They confess and the sheriff has been summoned to make a record of it. At the moment of his triumph, the poor man loses his grip on his sanity for real this time.

Retrieved from "https://heykidscomics.fandom.com/wiki/Witching_Hour_Vol_1_75?oldid=1468103"
Community content is available under CC-BY-SA unless otherwise noted.