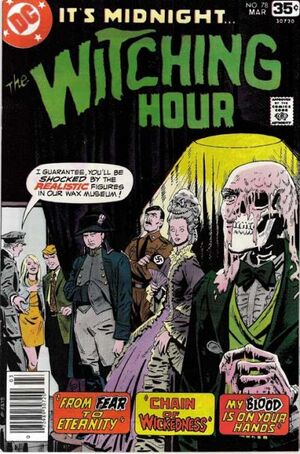 Appearing in "From Fear to Eternity"Edit

Synopsis for "From Fear to Eternity"Edit

Two kids vandalize a woman's wax museum so she makes wax figures of them and melts their faces which affects their real life bodies.

Appearing in "My Blood is on Your Hands"Edit

Synopsis for "My Blood is on Your Hands"Edit

A female vampire leaves a sharpened stake on the top of a woodpile so that her new husband will be able to defend himself if she succumbs to her bloodlust.

Appearing in "Chain of Wickedness"Edit

Synopsis for "Chain of Wickedness"Edit

Two friends receive a chain-letter which instructs the receiver to mail out thirteen copies after they have removed the name at the top of the list and added theirs to the bottom. One of the friends ignores the letter but the other follows the instructions. When he goes out to mail them a gas main blows up which scars his face, but he does get a settlement check for ten thousand dollars and an offer of bodyguard employment from a mob boss. Eventually he graduates to doing mob hits and when his boss tells him to get help from someone he trusts to pick up a gold shipment he calls up the only friend he has and offers him enough money to pay for his son's medical expenses. The man is unaware that the mafioso has been instructed to kill him after the pickup is made to eliminate witnesses. The time comes and the killer throws him overboard to drown, but ends up accidentally saving his life as a sudden whirlpool comes up killing the mafioso. The man returns to son with a gold bar and is surprised to learn that his son had mailed out chain-letters after removing the dead man's name from the top and adding his name to the bottom.

Retrieved from "https://heykidscomics.fandom.com/wiki/Witching_Hour_Vol_1_78?oldid=1468109"
Community content is available under CC-BY-SA unless otherwise noted.