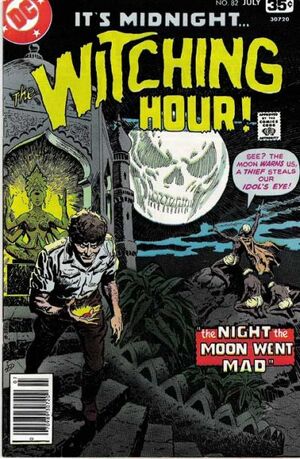 Appearing in "A Charmed Life"Edit

Synopsis for "A Charmed Life"Edit

Two convicts plan a prison escape but the gypsy expects his partner of planning a double cross, so he gives him an amulet which will transfer their souls into each other's body.

Appearing in "Who Tore Him to Shreds"Edit

Synopsis for "Who Tore Him to Shreds"Edit

When a man murders his wife's previous husband, the dead man reincarnates into the body of a falcon which protects the woman from the man's attempts to kill her for her money. Eventually the man becomes frustrated and draws a gun to shoot down the bird, admitting to his wife that he's going to kill her. The falcon reincarnates into the body of the wife and she shreds her husband into pieces.

Appearing in "The Moon Went Mad"Edit

Synopsis for "The Moon Went Mad"Edit

A man steals a gem from a tribe that worships the moon and as he exits the cave, he sees the moon now has the visage of a skull. When the natives meet with their seer he tells them the moon will lead them to the thief. The thief is astonished to see that the moon now looks like his face. The thief attempts to elude the natives, but he falls and feels as though he has done something awful to his face. The natives surround him with spears drawn and he denies being the culprit. We see that the moon's appearance has now returned to normal and the thief...has no face at all.

Retrieved from "https://heykidscomics.fandom.com/wiki/Witching_Hour_Vol_1_82?oldid=1468117"
Community content is available under CC-BY-SA unless otherwise noted.