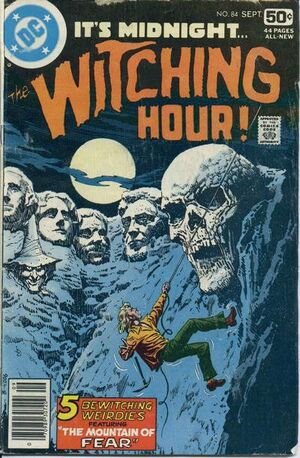 Appearing in "Of Greed and the Mummy"Edit

Synopsis for "Of Greed and the Mummy"Edit

A witch sends an Egyptian princess into the future where she encounters a man who cares only about her wealth. When the witch follows her, the man betrays the princess and offers himself to the witch in exchange for wealth. The witch transports the two of them another thousand years into the future.

Appearing in "The Ace of Death"Edit

Synopsis for "The Ace of Death"Edit

A circus assistant is bullied by another performer and the fortune teller gives him a deck of cards which she says will kill his tormenter if he draws the ace of spades. The performer does draw the card, but when the assistant does so as well, the performer's rope breaks and he falls into the assistant resulting in both of their deaths.

Appearing in "Never Wed a Warlock"Edit

Synopsis for "Never Wed a Warlock"Edit

A warlock marries a woman and becomes an abusive husband until his mother arrives, takes pity on the new bride, and teaches her the secrets of witchcraft so that she can fight fire with fire.

Retrieved from "https://heykidscomics.fandom.com/wiki/Witching_Hour_Vol_1_84?oldid=1468121"
Community content is available under CC-BY-SA unless otherwise noted.