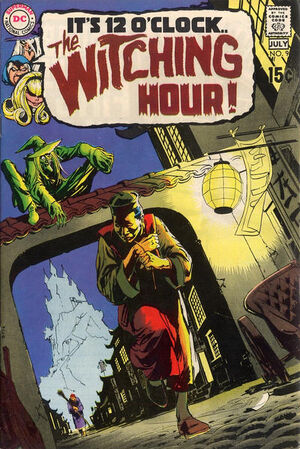 Appearing in "The Lonely Road Home!"Edit

Synopsis for "The Lonely Road Home!"Edit

A man afraid of growing old and dying makes a wish upon a strange statue always to remain the same as he is. Many years later, he meets a ghost who informs him that when the statue granted his wish to remain the same, it caused his death because "only the dead never change".

Appearing in "The Last Straw"Edit

Synopsis for "The Last Straw"Edit

A Chinese nobleman resents his duty of sweeping out the family tomb, but he must do it else the local warlord will seize the family estate as his own as a neglected tomb indicates that a family has died with no heirs. He gets the idea of visiting a warlock, who strangely resembles his recently deceased grandfather, and purchases a magic broom to sweep the tomb for him. When he neglects the tomb, his grandfather's spirit appears and reveals that he indeed was the warlock who sold him a cursed broom and that the broom will remain bound to him until the last straw falls out. The nobleman resolves to wait as the broom is wispy and he doesn't think it will last long. When the final straw does fall out he returns to his family estate to gather more funds to return to his life of ease only to discover that the local warlord has seized the property. He is thrown out and realizes he has become an old man. The grandfather's spirit appears again and tells him that when the last straw fell out, all the dust he swept reappeared in the tomb and the nobleman has lost a year of his life for each straw.

Explorers find a lost civilization and an artifact which is referred to as Trumpet of Doom. One man tells the other to stay away from it, but the gung-ho explorer is too excited about the possibilities of a new civilization arising from the sounding of the horn, which will wipe away the old. He sounds the horn and the entire planet blows up.

Retrieved from "https://heykidscomics.fandom.com/wiki/Witching_Hour_Vol_1_9?oldid=1467977"
Community content is available under CC-BY-SA unless otherwise noted.