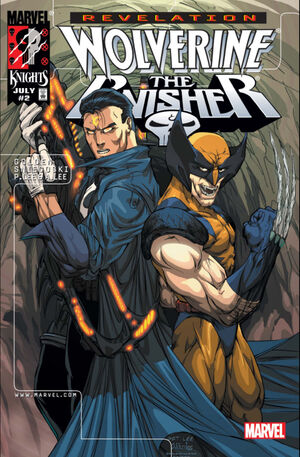 Continuing the team-up between the toughest men in comics!

A mystery illness has struck down New York's entire Upper West Side--and the rest of the city is next!

Among the fallen lay Frank Castle's dear friend--and she'll die unless an antidote is found!

Now the Punisher and Wolverine must descend into a series of long forgotten underground tunnels to unravel the mystery of the mutant called Revelation.

That is, if they can keep from killing each other!

Retrieved from "https://heykidscomics.fandom.com/wiki/Wolverine/Punisher_Revelation_Vol_1_2?oldid=1548469"
Community content is available under CC-BY-SA unless otherwise noted.