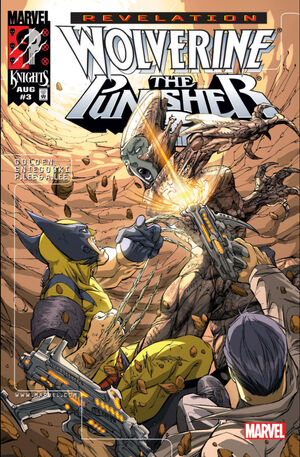 You think you can just take out some innocent girl, 'n make up for it later? You oughta know it doesn't work that way. Killin's easy. Livin' with it, now that's hard.

Appearing in "One Shot at Heaven"Edit

Unfortunately, they're a little tied up fighting the battle droids that were designed to stop the Morlock called Revelation!

Been wondering what could bring down the Punisher? Lets just say that this issue proves that Frank Castle isnt as invulnerable as we all thought!

Retrieved from "https://heykidscomics.fandom.com/wiki/Wolverine/Punisher_Revelation_Vol_1_3?oldid=1467679"
Community content is available under CC-BY-SA unless otherwise noted.