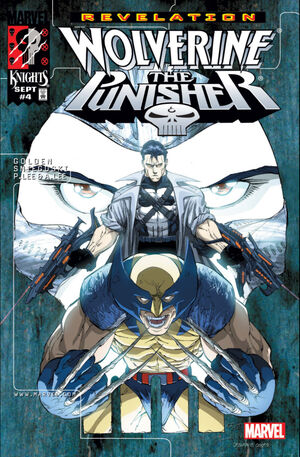 Appearing in "So This Is Hell"Edit

The nail-biting conclusion! Revelation is about to crawl from the sewers to daylight, where her death aura will murder thousands!

Can Wolverine and Punisher stop her without killing her? And do they even want to?

Marvels bad boys have trashed the other robots that seek to take her out without realizing theyve released Failsafe Omega, a construct with a thermonuclear warhead in its guts!

Marvels titans of tude get together for four issues of brutality and mayhem. Sounds like a dream book for fans of Wolvie and Frank Castle.

Retrieved from "https://heykidscomics.fandom.com/wiki/Wolverine/Punisher_Revelation_Vol_1_4?oldid=1548458"
Community content is available under CC-BY-SA unless otherwise noted.