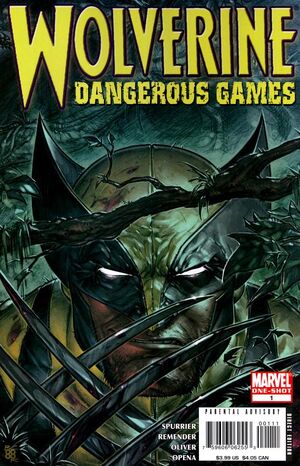 With bloodsports banned in the UK, a group of overfed Brit Aristos have relocated to the Louisiana forests. Their aim? To pit themselves (aided only by a vast pack of slavering hounds and their own copious wealth) against a truly worthy foe: a single, terrified fox. Sadly for them, there’s more than one furry little critter in the woods tonight…

In Bangkok, Logan is meditating and trying to relax. He doesn't want the Wolverine to take control, to define him. Monk Khalan arrives and thanks Logan for scaring off the local mobs without physical violence. He tells Logan the Buddha has stated that there must be evil so that good can prove its purity above it, to which Logan responds, "But does there hafta be so damned much evil?" As he leaves, a woman named Dao thanks Logan for helping the community, and makes him dinner at her apartment. She tells him that she is actually from Burma, and she was snuck in illegally as a dancer. They kiss, and she reveals a dove tattoo on the back of her thigh as she starts undressing. Before any intimacy occurs however, Logan says that he still doesn't want to wake up the Wolverine. Instead, he goes back to Monk Khalan's temple, where he finds 8 dead monks and 4 mob members killing Khalan with long knives. Logan kills 3 of them, and is about to let the 4th live until he sees the dive tattoo on the back of his neck and realizes who their boss is. Wolverine arrives at Dao's apartment, who starts shooting at him with no effect. Before she dies, she questions the fact that Logan was a man of honor, to which Logan replies that now he is Wolverine.

Retrieved from "https://heykidscomics.fandom.com/wiki/Wolverine:_Dangerous_Games_Vol_1_1?oldid=1467698"
Community content is available under CC-BY-SA unless otherwise noted.