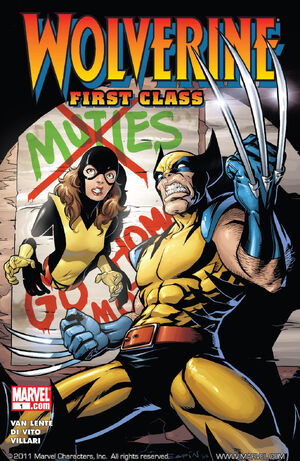 This mansion is still a school, and I consider all those who live under its roof students. Even you still have something to learn. If not from me... ...then, perhaps, from Kitty.

Appearing in "The Buddy System"Edit

Synopsis for "The Buddy System"Edit

Before starting her first day of classes at Xavier's School for Gifted Youngsters, Kitty Pryde plays a game of volleyball with the X-Men. The ball bounces over to Wolverine, who pops it with his claws. Professor X calls Kitty to meet him at Cerebro's frontal lobe chamber. Kitty recalls how she came to discover her phasing powers at the age of thirteen.

Wolverine joins Kitty and Professor X and Professor X tells them that Cerebro has detected a large presence of new mutants in West Virginia. At the insistence of Professor X, Wolverine reluctantly takes Kitty on the mission. Kitty tries to strike up a conversation while they travel on the X-Men Blackbird, but Wolverine resists. When they finally land at the site, Wolverine tries locking Kitty in the jet, but she simply phases out. Realizing he has no choice, Wolverine lets Kitty tag along.

The two mutants walk along the city streets and Kitty uses a small device connected to Cerebro to locate their mutants. A mob of angry anti-mutant citizens attack them, but Wolverine evades them and escapes into a local market with Kitty. The angry mob invades the marketplace and surrounds the two "muties". Fed up with these anti-mutant protesters, Wolverine charges at them with his claws withdrawn.

Kitty panics and phases out of the building, running until she reaches a vandalized house with anti-mutant graffiti. Kitty phases inside the house and concludes from some old photos that the town welcomed the mutant, Michelle, until something went horribly wrong. Noting that the town was not the problem, Kitty runs back to the market place holding the mutant's sweater. She finds Wolverine terrorizing the anti-mutant citizens and tells him to stop. Still angry, Wolverine tries attacking Kitty until she explains the situation and calms down.

Using the scent from the jacket, Wolverine tracks down Michelle and finds her hiding in the woods. Michelle asks them if they got her distress signal. Kitty deduces that Michelle's mutant power is to project her emotions into others, causing everyone in town to become just as distressed as she was. Wolverine "compliments" Kitty on her first mission by saying that the "[has] seen worse."

However, as soon as they get back to the town, Kitty overhears Wolverine arguing with Professor X. Wolverine says that Professor X knew that Michelle could project her emotions and possibly send him on one of his "animal rages". Professor X counters that his fear of his animal rages is greater than the threat they pose and that his mission with Kitty could help tame this fear. Kitty finishes her diary by saying that this is the first time she feels like she belongs at Xavier's School. Wolverine asks her if she wants to learn how to pop wheelies on a motorcross bike without using a helmet. Kitty enthusiastically agrees.

But unless they learn to work together, neither of them will come back from their first mission together alive!

Retrieved from "https://heykidscomics.fandom.com/wiki/Wolverine:_First_Class_Vol_1_1?oldid=1495042"
Community content is available under CC-BY-SA unless otherwise noted.