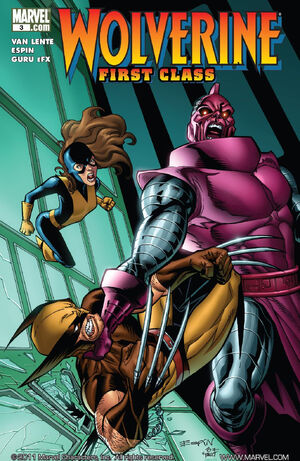 You know, I'm offically tired of you questionin' my orders every five minutes! Newsflash, chickie: this ain't a democracy. Just do it.

Appearing in "The Last Knights of Wundagore: Part One"Edit

Synopsis for "The Last Knights of Wundagore: Part One"Edit

A New Men taleweaver named Prosimia gives a tale of their species origins by the High Evolutionary. He goes on to tell of the origins and rise of Man-Beast. While to two warriors Lady Shadra (who was evolved from a black panther) and Squire Gulo (who was evolved from a wolverine) fight off the Man-Beast's forces which ends with Thor exiling the Man-Beast into space. Prosimia says the two might warriors left to seek their destiny, but says they will return some day.

Suddenly, the X-Men Blackbird streaks across the sky, and some of the New Men wonder if that could be Shadra and Gulo. Kitty Pryde lands the Blackbird on a nearby hill and Wolverine talks with some of the local hunters, who warn them not to venture near Mount Wundagore. Wolverine shrugs off their warnings and the two X-Men head to there in search of Magneto.

They find a seemingly abandoned village, but Wolverine detects animal scents. Two armored knights on flying scooters attack the two X-Men, and Wolverine saves Kitty from their first attack. Wolverine jumps onto a scooter and knocks its rider off. He pursues the other knight, but runs into a pine tree, and then into a building. Instead, Kitty deals with the second knight by phasing through the scooter and shorting out its circuitry.

Wolverine starts threatening the fallen "knight", actually a man named Dicero (who was evolved from a rhinoceros). Kitty tries to make Wolverine back off, but he snaps at the girl in another one of his rages. The rest of the New Men emerge from their underground shelter, and Lady Bova apologizes for their inhospitable greeting. She explains that her people have been disappearing from their town and describes a strange figure on the mountain that Wolverine figures must be Magneto.

Kitty returns to the Blackbird to find the hunters have tried to boost the X-Men's plane. Although the automatic defenses kept the plane mostly in one piece, Kitty finds they do not have a radio. Kitty runs back to town to warn Wolverine and Prosimia follows her.

Plus, Logan and Kitty versus Man-Beast!

Retrieved from "https://heykidscomics.fandom.com/wiki/Wolverine:_First_Class_Vol_1_3?oldid=1538036"
Community content is available under CC-BY-SA unless otherwise noted.