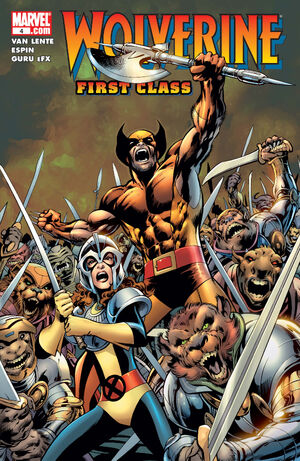 Appearing in "The Last Knights of Wundagore: Part Two"Edit

Synopsis for "The Last Knights of Wundagore: Part Two"Edit

In Wundagore Mountain, Wolverine, Kitty Pryde recently acquired cat state, and Lady Bova face Man-Beast's re-evolved New Men. The High Evolutionary decides not to take sides in the conflict, as he wants to use this experiment to see if his decision to give New Men sentience was really the right thing to do. As Man-Beast's forces advance, Wolverine panics and runs away due to the High Evolutionary having recently removed the bestial part of his genetic makeup.

Lady Bova carries the unconscious Kitty Pryde out of harm's way, and meets Prosimia, who leads them to the knightly armory. As Kitty starts to regain consciousness, Prosimia adorns her with the armor of Lady Shadra of the Cat People. The new Lady Shadra is skeptical that wearing armor could suddenly transform her into the New Men's savior, but Prosimia replies that the armor is merely to enhance the true warrior that he has already seen.

Using her enhanced cat senses and phasing ability, Kitty takes down many of the Man-Beast's forces. However, she soon realizes there are too many forces to deal with and tells Prosimia and Lady Bova they have to fall back.

Outside the mountain, Wolverine considers walking away as he now considers himself useless for the situation. At the village, Lady Bova unsuccessfully tries to encourage her people to fight the Man-Beast and his forces. However, Kitty manages to rally them to fight back when she appears on a flying scooter wearing the armor of their hero, Lady Shadra.

The Man-Beast retreats, and the form of the High Evolutionary arrives in astral form and, explaining that his "armor" is just a convenience shell, regrows his Evolutionary exoskeleton. He restores Kitty back to her original form and explains to Wolverine that he did not actually alter his genetic makeup; that the only character flaw he saw was misery he had inflicted on himself. Wolverine promises to give Kitty more responsibility on the next mission.

Later, Dicero finishes telling the tale of Wolverine and Lady Pryde to the young New Men and puts the story on Prosimia's grave.

But Wolverine has had his berserker instincts removed and Kitty is a cat. What will they do?

Retrieved from "https://heykidscomics.fandom.com/wiki/Wolverine:_First_Class_Vol_1_4?oldid=1467714"
Community content is available under CC-BY-SA unless otherwise noted.