Start a Wiki
Part of the 'Old Man Logan' event 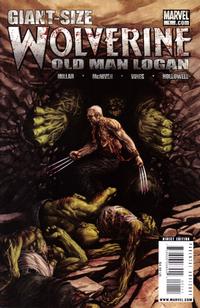 You shouldn't have made me angry, Logan... People piss themselves when I get angry.

Logan takes his time gutting and cutting up members of the Hulk Gang one by one. By the way, the Hulk Gang turns out to be inbred cannibal grandchildren of Bruce Banner and Jen Walters, who were both turned crazy by the extra radiation they were subjected to in California's nuclear blasts.

A lot of folks say I went mad. That the radiation sickness did something to my brain... But who else was I gonna mate with besides my first cousin? Jenny She-Hulk was the only woman out there who could take the damn pace!
— Pappy Banner

The two who killed Logan's family are washing the blood off in their nearby watering hole when they're sliced and diced, a handful of others are hanging out at Sonny Stark's bar, picking over the belongings Logan's family had when they died.

Charlie's twin brother, Luke is the first to die, with Logan's claws coming from the front of his forehead as if his fist was midway through the brain.

Three other members including Beau are at Heff's Mansion, which has become a whore house, where they used up all the girls there between three of them. Logan seems to kill them too, after blowing up their cars.

At Banner's Lair nearby, Banner and his descendant, Bobbi-Jo feed a baby hulk and talk about Logan's arrival. He's right on time when he crashes the Fantasti-Car previously owned by the Gang right into their trailer park/camp, decapitating some, and setting off a bomb on board to blow the rest of them to hell. The survivors are treated to a last meal of Logan's claws, and even Bobbi-Jo doesn't survive.

Pappy Banner emerges from his cave, seeming to have control of his Hulk strength in his human body. They fight, and Wolverine seems to gut him until the Hulk emerges once again!

Twelve hours later, Billy-Bob Banner returns from his friend's house with the Jim Belushi movies they sent him for to find all of his clan wiped out except Pappy and Little Baby Bruce.

Pappy keels over in pain, not understanding why, since he's always been eating his opponents in the past. Billy-Bob reminds him of Logan's healing factor, just as Logan cuts his way out of Pappy's back.

What's the matter, Banner? Something you ate?
— Logan

Billy-Bob nervously hands over his pants boots and coat in order to perserve his life, and pleads with Logan to leave Baby Bruce alive.

A month later, Logan holds Maureen, Scotty, and Jade's Funeral, and his neighbors attend, including Donovan. They try to talk him out of leaving, setting out to bring down the villains one by one, but he insists there is nothing at his ranch for him anymore.

Besides, I got a little partner to help me out an' there's a nice poetic justice to Bruce Banner Junior bein' the first guy on my new team.
— Logan

They ride off into the sunset.

In this Comic Hulk is fatter than his younger self.

Retrieved from "https://heykidscomics.fandom.com/wiki/Wolverine:_Old_Man_Logan_Giant-Size_Vol_1_1?oldid=1467819"
Community content is available under CC-BY-SA unless otherwise noted.