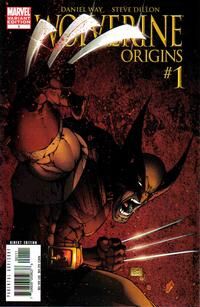 Logan embarks on the first leg of a long and bloody quest for vengeance against those who have turned him into the monster he is today!

Retrieved from "https://heykidscomics.fandom.com/wiki/Wolverine:_Origins_Vol_1_1?oldid=1764223"
Community content is available under CC-BY-SA unless otherwise noted.