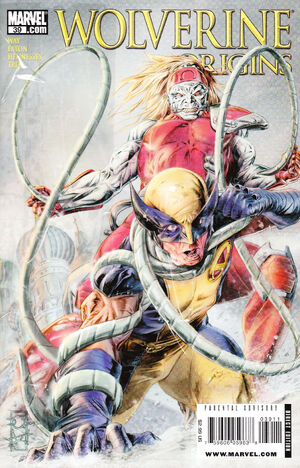 Deep in the heart of Russia, Wolverine drags himself one step closer to the truth about the man known only as Romulus—but the death-touch of Omega Red stands in his way! With answers finally within reach—will Logan fall victim, another casualty of the Soviet serial killer’s carbonadium tentacles? Part 3 (of 4)

Retrieved from "https://heykidscomics.fandom.com/wiki/Wolverine:_Origins_Vol_1_39?oldid=1657783"
Community content is available under CC-BY-SA unless otherwise noted.