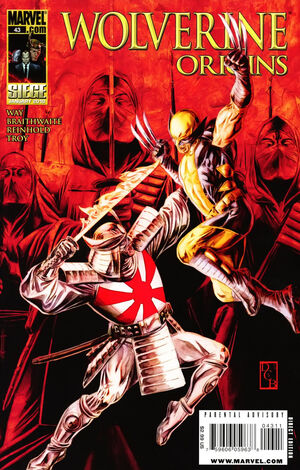 “7 The Hard Way,” Part 3 With Bruce Banner and his fearsome son Skaar onboard, and with the enigmatic X-Man Cloak apparently on his side, Wolverine’s mysterious plan to finally defeat Romulus seems to be going well…but that was before coming face to face—and blade to blade—with Keniuchio Harada, the Silver Samurai! Is he part of the plan, or the one who will completely derail it?

Retrieved from "https://heykidscomics.fandom.com/wiki/Wolverine:_Origins_Vol_1_43?oldid=1766958"
Community content is available under CC-BY-SA unless otherwise noted.