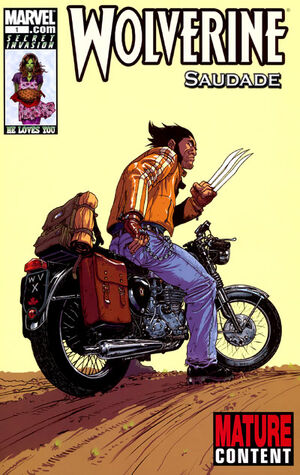 Sometimes I get this feelin'... kinda a longin' yearnin' maybe. For somethin' that was lost... ...or maybe don't even exist yet. Brazilians got a word for it-- --Saudade.

Presented for the first time in North America: an amazing tale by two of Europe's top creators, starring one of the world's most popular super heroes!

While on holiday in Brazil, the X-Man known as Wolverine has his motorcycle stolen by a group of young boys — one of whom has a secret.

When a brutal gang kidnaps the boy, Logan sets off on a quest to find him — leading to a deadly encounter with a corrupt faith healer who may not be what he appears!

WOLVERINE: SAUDADE is a vicious saga of bloody revenge as only Wolverine can deliver!

Retrieved from "https://heykidscomics.fandom.com/wiki/Wolverine:_Saudade_Vol_1_1?oldid=1467903"
Community content is available under CC-BY-SA unless otherwise noted.