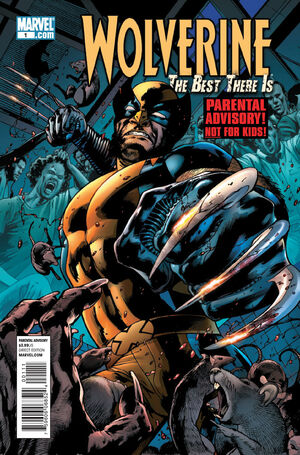 Publisher
Marvel Comics
Previous Issue
Next Issue
—
Wolverine: The Best There Is #2

Appearing in "Contagion - Chapter One: Impulsion and Whim"Edit

Synopsis for "Contagion - Chapter One: Impulsion and Whim"Edit

After a raucous night and a gallon of Everclear at a San Francisco biker bar, Logan awakes naked and chained, forced to fight a fearsome chemical-bath freak known as Griz for the entertainment of some tech-savvy hillbillies. Quickly disposing of his opponent and captors, Wolverine hitches a ride with a beautiful young woman named Driver, who convinces him to be her date for the night.

Meanwhile, a mysterious group of mercenaries unearth a barely-breathing body in the Louisiana Bayou. But the ordeal of the poor wretch known as Mr. Sikes isn't over. Subjected to the seemingly innocuous touch of the mercenary leader, Winsor, Sike's skin suddenly bubbles and seemingly boils - and then miraculously heals.

Winsor and crew's next stop? A sprawling party at an abandoned industral warehouse, where Winsor mingles before zeroing in on Driver and her new friend, Logan. Introductions are made, palms are pressed, and hell breaks loose. As Logan's mind disintegrates into a hallucinatory fever dream, the party devolves into bloody mayhem. Reeling, Logan rushes out of the bar and plunges his Adamantium claws into his gut. As far as Winsor is concerned, it's a good start...

When Wolverine faces a problem of the villainous kind there's a good chance that he'll use his Adamantium claws to whip up a lethal solution to it. What happens, though, when he faces an opponent who becomes a much bigger problem if he's killed? Enter: Contagion, a bold new addition to Wolverine’s rogue’s gallery. But first, Logan must contend with Contagion’s defenders, the aptly named crew known as the Unkillables.

Retrieved from "https://heykidscomics.fandom.com/wiki/Wolverine:_The_Best_There_Is_Vol_1_1?oldid=1727265"
Community content is available under CC-BY-SA unless otherwise noted.