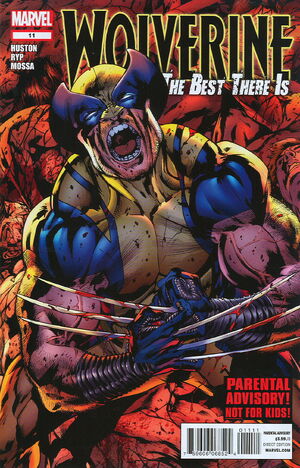 Some people just don’t stay dead, no matter how deep you buried them, and no one knows this better than Wolverine.

After enduring weeks of torturous experiments at the hands of the sadistic Contagion, Logan gave him a taste of his own medicine.

So how is Windsor standing in front of Logan now, stronger and deadlier than ever?

And what is his obsession with Wolverine’s healing factor?

Logan’s about to find out just how hard you have to kill a man, to make sure he stays dead.

Retrieved from "https://heykidscomics.fandom.com/wiki/Wolverine:_The_Best_There_Is_Vol_1_11?oldid=1727267"
Community content is available under CC-BY-SA unless otherwise noted.