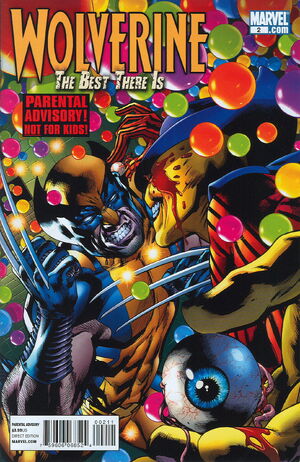 Fellow X-man Beast runs some tests and informs Logan that the DNA residue on his hands was a chemical suggestive excreted by a mutant called Jackson Day. The effect Logan felt were his inner desires bubbling to the surface. The monster within unleashed.

Logan returns to the location of the party to, an abandoned factory ground. There he is attacked by two seemingly unkillable opponents, a man in a suit who seems crazy and the villain Madcap.

Logan chops his way through them only to meet another mysterious stranger, who introduces himself as Goth. He leads Logan to a door, saying Windsor is inside. Logan can smell his prey within.

But it's not the tall man that emerges from the shadows, but a small figure with a bag on it's head, flanked by two of the mercenaries who immediately open fire on Logan.

It’s cover-to-cover blood-soaked action as the most extreme Wolverine monthly ever continues! Wolverine has never faced an opponent quite like Contagion, who becomes a much bigger problem if he's killed! But first, Logan must get past the aptly named Unkillables. Round one: Madcap. Whatever you do, don’t look into his eyes.

Retrieved from "https://heykidscomics.fandom.com/wiki/Wolverine:_The_Best_There_Is_Vol_1_2?oldid=1643910"
Community content is available under CC-BY-SA unless otherwise noted.