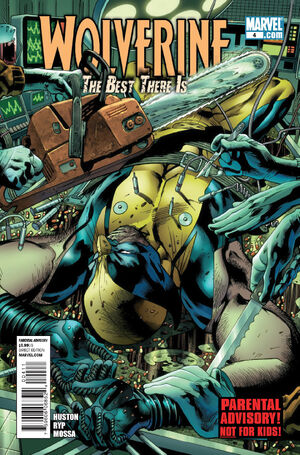 Appearing in "Contagion - Chapter Four: All That Life"Edit

Synopsis for "Contagion - Chapter Four: All That Life"Edit

Wolverine has been captured by a tale pale man named Winsor who collects unkillable beings and tests them with an array of deadly viruses, diseases and cancers that breed inside his body.

Winsor does this for his son, the product of generations of inbreeding, in the hopes of finding a cure for his condition.

He makes Wolverine an offer: put the child out of his misery, or allow him to test Wolverine's healing abiities to create a cure. Wolverine chooses the latter, the child is strapped with an explosive collar, and Winsor begins the experiments.

The latest and most vicious of these is giving Wolverine an allergy to Adamantium, the unbreakable metal that his entire skeleton is laced with.

Retrieved from "https://heykidscomics.fandom.com/wiki/Wolverine:_The_Best_There_Is_Vol_1_4?oldid=1481079"
Community content is available under CC-BY-SA unless otherwise noted.