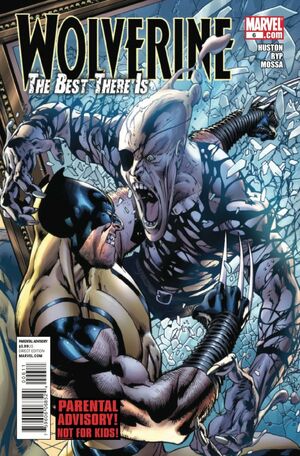 Appearing in "Contagion - Chapter Six: The Tortures of Good Deeds"Edit

Synopsis for "Contagion - Chapter Six: The Tortures of Good Deeds"Edit

Wolverine's mutant power, the ability to heal from any wound or sickness, put him square in the sights of a man named Winsor, who captured Logan for a specific purpose.

Winsor's own body was capable of producing and incubating virulent diseases and terrible Bioweapons. Winsor infected Logan with every virus, bacteria and illness known to man, as well as inflicting horrible physical wounds on his body, in an attempt to test the extreme limits of Wolverine's healing factor.

Logan managed to escape and kill his captor, but with Winsor "died" should be "(DEAD)" the secret of what he was trying to achieve with his mad experiments.

Wolverine's healing factor has been pushed to its absolute limits. He barely manages to make it back to X-Men headquarters.

Retrieved from "https://heykidscomics.fandom.com/wiki/Wolverine:_The_Best_There_Is_Vol_1_6?oldid=1727266"
Community content is available under CC-BY-SA unless otherwise noted.