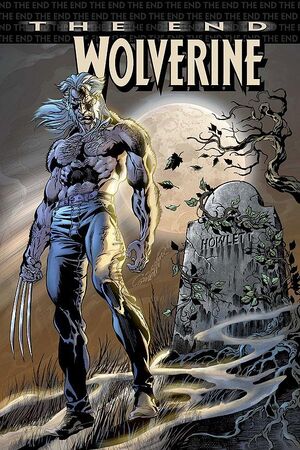 You shouldn't have come here, Logan. You don't want this. Not really. There are only ghosts here. You should go home. Live your life. Wait for your time.

A guy named George steps out of his bar and places some heavy boxes on his truck. Two rather drunken townspeople ask George to where he is bringing the boxes. When George says that they are addressed to a place out by River Road, one of the drunken guys asks George if he is going to see “the old weirdo.” George denies that the man he is going to see is crazy, defending that the man is just like you and me. George says that he isn’t giving the man anything and that they’ve got a deal, revealing that that man is responsible for getting most of the pelts in this town.

The guy says that he heard the man George is going to is a mutant. The friend of the guy asks why he would care; because he heard that his friend’s cousin Tiffany is a mutant as well. The guy gets angry and denies that his cousin is a mutant, claiming that she just has a glandular problem. The other guy mocks that Tiffany looks like a whale and they should put her back into the ocean where she belongs. George drives away, telling the other two guys that he will be back around 6 o’ clock. The guys are curious and ask George how long he has been delivering stuff to this man. “Since I was eleven,” a serious looking George replies as he drives away.

A deer graze through the grasses, looking for food. They notice that they are not alone and are being spied upon. As the deer panics and runs away, an aged and angry Wolverine jumps out of the bushes and chases the deer! Wolverine snikts his claws out and jumps at the deer, ready to kill it. The deer jumps away and Wolverine drops with his face into the snow. Routed, Wolverine gets up and decides to let the deer go.

When he tries to pull his claws back in, however, it works, but as Logan does that he suffers a small amount of pain. He is getting old. Logan mumbles in another voice why he doesn’t answer him. Wolverine replies that he’s got nothing to say. He walks through the woods and from up a high hill looks at the beautiful landscape.

The voice in Wolverine’s head tells him that he suffers from arthritis, like all people do when they get old. The voice reminds Logan that his body has suffered a lot of insults. The voice asks Logan if he is afraid of what is going to happen to him and if he is afraid to suffer. To live for yet another century? Wolverine answers that he doesn’t care and walks back to his cabin, where George is waiting for him.

George happily tells “Mr. Logan” that he brought the fishing lure Logan ordered. Logan thanks George and enters his cabin. Wolverine mumbles and wonders why he doesn’t ask George if he has been followed. George overhears that comment and confirms that only Jeff and Danny were drinking in front of his store, but Logan doesn’t need to worry about those two idiots because they already know where Logan lives because they saw him when they were hunting for weasels.

Wolverine asks George if he wants something from him, but reminds the guy that he doesn’t have any money to tip him. George recalls that he has been delivering stuff to Logan for fifty years now, and so far Logan has never tipped him before - so he isn’t going to ask for it now. George says that he knows Logan doesn’t like to talk, and can understand that after what happened to him, but George has something to hand over to Logan: a letter!

Some time later, on a rainy day…

Wolverine attends the funeral of his old enemy, Victor Creed. A priest reads the last words for the once-vicious mutant, recalling that Creed indeed was a villain, but in the end grew to know and love Jesus in his later years. And that it was on that moment that Creed cast away the sadness of earlier days and found himself alive for the very first time. Wolverine and George take a look around at the many people who attended the funeral and recognize some former villains. But they remain silent, as the priest remembers how much charity work Victor did and how much he loved animals. Hearing that, a tear falls from Wolverine’s eyes and he remembers the many fights he and Sabretooth had.

George notices Wolverine’s tear and asks Logan if the man who died was a friend of his. Wolverine denies that and calls Creed an animal. Wolverine tells George that Sabretooth hurt a lot of people and knows that he only found God because he was afraid of dying. Wolverine believes that he shouldn’t have come to the funeral, but he did it because he always thought that there was some kind of connection between him and Sabretooth. That, after all was said and done, he would somehow found out that he and Creed were tied together. Wolverine finds it sad that all those years are wasted on them trying to kill each other. And it’s even sadder to Wolverine that, in the end, it doesn’t mean anything.

A female attorney approaches Wolverine and George. She introduces herself as Emily Rand and says that she used to work for Sabretooth and says that Creed spoke often of Logan before he died. Wolverine hopes that none of it was good. Emily says that she is aware of the fact that Logan and Creed had their differences but, even so, Creed indicated a respect for Logan above anyone else. Emily says that Creed felt saddened that Logan insisted on living in the ancient past. Emily hands over Logan a letter with a crest on it, as instructed to her by Victor Creed himself, and then she walks away. Wolverine smells at the letter and hesitates whether to open it or not.

A few minutes later, George drives Wolverine back home. While he sleeps, Logan has several flash-backs to the time Weapon X scientist put the Adamantium on his body. Logan remembers how he overheard the scientist say that he wouldn’t even remember anything of his past before this, not even his own name. Wolverine next hears one of the scientists ask what his name was before the experiment. Another scientist says that it was “Logan” and injects Logan with something. The remembering of this pain causes Logan to wake up from his dream, screaming.

George stops the truck and tells Logan that he has been talking during his sleep. Logan gets out of the truck and opens a giant fence and orders George to stay with the truck. George doesn’t want to and follows Logan inside. George asks Logan why he had to bring him halfway across Alberta, but Logan’s speed increases and George is unable to keep up to the old man. Once George finds Wolverine again, he stares in astonishing when they both see a gigantic mansion!

Logan enters the mansion and comes into a big living room. He talks into his other voice again, telling himself that he shouldn’t have come there and that he doesn’t really want all this. Logan says, in his other voice, that all this are ghosts from the past and that he should go home and to wait for his time. George follows Logan and asks him what’s wrong. George takes a look around the room and recognizes the same crest above the fireplace as the one who stood on the letter!

Wolverine smells around and George asks where they are. Logan tells George to be quiet and warns him that they might be watching. Wolverine runs again using his full speed. George follows him and finds Logan standing in front of a grave, which reads John Howlett, beloved son, lost before his time. 1885 – 1897. On the grave lays a red book. Logan picks it up and smells on it. George asks what the book means. Logan knows that the book is Japanese and explains to George that he used to live in this region a long time ago. But Logan also knows that whoever left the book knows too much about him.

George is as surprised as Wolverine is. Wolverine tells George that he owes him an explanation for driving him so far, but doesn’t know if George is going to understand it. Logan asks George if he ever wished for anything in his life. George says he has a little one: he dreams about a happy ending for his life, where he can sail on a river in a boat and smoking a nice cigar.

Wolverine explains to George that this estate used to belong to the family Howlett. He continues that, a couple of centuries ago, there was a tragedy: the children all died, one after another. Wolverine says that the banks took this place over and, before you knew it, the place got abandoned. No one wanted to buy the estate. All of the money went missing. George asks what happened to the Howletts. Wolverine says that he is the only member of the family left. There is only one problem, he adds: he has no memory of that time. Wolverine knows that he was born there, thanks to the small pieces of the past he discovered over the past years. But Logan knows that they are just stories he heard, and says that for all he knows he might as well be from Mars.

All of this doesn’t make any sense to George and he asks Logan why he has no memories of this life. Wolverine explains that’s because he is a mutant, and that part of his mutation is his healing factor. Logan has discovered that whenever something bad happens to him and he doesn’t want to remember it, his healing factor completely erases that event out of his memory. Logan tells George that’s all he ever wanted: to connect with the person he was. Wolverine continues to say that a long time ago, he thinks it was after he left this estate, someone did a very bad thing to him. He snikts out his claws, and tells George that he suspects the ones responsible for his claws are their own people: people who worked for the Canadian government. All Wolverine remembers is a name: Weapon X.

George can’t believe anyone would do such a horrible thing. Logan tells George that he still doesn’t get what’s happening here. Wolverine knows that someone wanted that he came here and knew that he was capable of detecting a scent that was over two hundred years old. Wolverine says that that smell is the smell of everything he has lost along the way. Logan gets angry and throws the book on the ground, realizing that Weapon X has never left and had Sabretooth involved for all these years. Wolverine now realizes that Weapon X has been watching him all this time and had just been waiting for the right time. He thinks that Weapon X is probably watching him right now. Wolverine grabs George by his throat, suspecting George that he could be an agent of Weapon X as well, for all he knows.

George tries to calm Logan down, not knowing what he’s talking about. Wolverine puts George down and looks around. “Weapon X, man,” Wolverine says, “They are everywhere…”

Retrieved from "https://heykidscomics.fandom.com/wiki/Wolverine:_The_End_Vol_1_1?oldid=1467951"
Community content is available under CC-BY-SA unless otherwise noted.