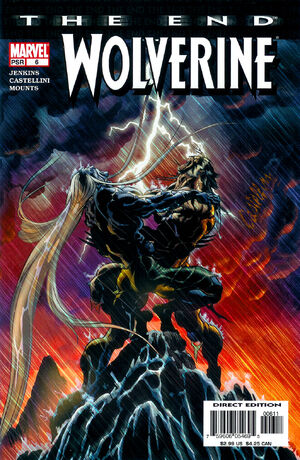 Wolverine enters John’s casino, unaware that he’s being watched by his security guards. Logan walks to a lift, which brings him to the top. But that’s just what the guards want him to do.

Suddenly, Logan drops out of sight from the guards, but they still see him moving to his target on their monitors, so they don’t think something’s wrong. John and his partner are also watching Logan moving to them, and are pleased that Logan is as predictable as ever. John wants to move over to action, and can’t wait to see the look on Logan’s face once he sees that they were waiting for him. Little do they realize that Logan has taped a carton figure of himself on the lift’s window, so that the guards think he’s still inside, and Logan himself hangs underneath the lift.

He jumps down, and kills some of the guards. He breaks through a fence, and enters a lab of some sorts. Meanwhile, John was already waiting for the lift, and thinks he’s still dealing with the actual Logan. John gets in the lift, and realizes that the joke’s on him. In the lab, Wolverine sneaks up on some scientists, who are standing in front of a holding tank. John realizes where Wolverine must be and sends out his guards to permanently deal with him.

The guards enter the lab, but Wolverine kills them all. John’s partner wants to open the door for John, so that he can stop him. But John tells him not to, as he wants the element of surprise. Instead, John uses his power and phases through the lab’s wall. Wolverine seems to recognize the tank and wants to destroy it. John confronts Logan and tells him that’s a huge mistake to make. Logan demands his brother to explain it to him. John says that this is an opportunity and won’t fight him. He just wants Logan to listen to him. If Logan would blow the machine up, it would destroy Nevada and Logan would be responsible for the biggest hostile takeover in the history of the stock market. John says that Logan will be holding the big liberation for mutants in his hands: no more asylums, no more registrations towards the humans. Logan smiles, and tells John that’s the difference between them: while John has been trying to be God, Logan has been working for him hoping that he’ll have a place to live when it’s his time. And John doesn’t deserve liberation.

John activates his powers and starts attacking Logan. The guards want to help their master, but one of them recalls that their master Howlett wanted to take Logan alone. Logan slams John down and calls him a liar. He knows that it never was about freedom, and just about money. John claims otherwise, but Logan slaps him in the face. John gets angry as he knows that Logan too is no saint. John fights back and kicks Logan away and restrains him. John remembers that it was Logan that killed Xavier, and that he doesn’t want the other X-Men to know. And that Logan also doesn’t know how to explain what he did to Rose.

Logan doesn’t believe his ears. John smiles, and tells Logan to pull away like he always does, and to all those children he abandoned. John calls Logan a worthless son, brother and father! Logan wants to know what John knows about them. John doesn’t know which one Logan means: the one who became an accountant? John wants to know what they would do when they are reunited with Logan, and find out that he never loved the mother and left them because he was disappointed at them because neither her or the kid were mutants?

Logan fights John again, and finds it a shame that he seems to have all the answers, but not what he really wants. John isn’t impressed, and calls Logan’s relatives targets. John gets away from Logan, using his powers. John agrees to wait, if that’s what Logan wants him to do. John informs Logan that he’s got a great choice to make, but doesn’t even realize what that choice is. Wolverine doesn’t agree. He bets that John doesn’t know that the unit holds an “Ecstasy” trigger, circa 2023. Logan explains that it’s a suitcase bomb designed by Holzer Enterprises in Austria with private funding. As a matter of fact, Logan continues, he has defused two of those triggers. Now, they can’t trigger a detonation if the circuit board breaks, and they’re very fragile.

John doesn’t believe that Logan would dare do that. Logan smiles, and says that the units are rare and almost unaccounted for. He guesses that John has the last one. John won’t lie to his brother and admits that he holds the cards. But he’s just delaying things. John claims that he can have another control device manufactured in three points, at which point Logan will be dead. Or, John adds, Logan can make a better decision and join him. Logan won’t kill people.

John explains that they would give the people a week to evacuate the city. Bang goes Las Vegas, he says, and bang goes to U.S. economy. And then they would be there to pick up the pieces. John asks Logan if he doesn’t see what he’s going to give up. But Logan really doesn’t, and says “nope.” John has heard enough and orders his men to shoot Logan. He doesn’t even care what gets hit in between; he just wants to see Wolverine’s dead body.

Wolverine escapes the guards and makes it to the elevator. He makes it back to the lift and wants to go down with it, but John has followed Logan and jumps into the lift. They fight, and John snikts his claws out too! He slashes Logan with them, so angry that he’ll kill all of Logan’s surviving friends and family for this. Furious, Logan gets up and fights back. But it’s still not enough to bring his brother down. John uses his powers and, with an enhanced punch, blows Logan out of the cliff. But, Logan manages to hold himself on the lift’s door so he won’t fall.

Logan climbs back up, and notices his brother changing into a huge demon. John asks Logan if he realizes what he has thrown away. John claims to have all the answers Logan searched for his entire life. John knows about Rose. He knows what happened to Dog. He also knows about Jean Grey and the reason Sabretooth choose to let Logan live that time in Chicago. He knows why Wolverine has left the X-Men and he knows about the son Logan didn’t even knew he had him, the one son with the latent mutant abilities similar to their powers.

Wolverine thinks that John is lying, but John tells Logan that he’ll now never know the answer, because he’ll be dead. John only hopes that, when he goes to visit his son, he’ll accept him as his father! Logan still doesn’t believe it. John tells James that it was all for nothing, and blew away his one chance. John says that, in five minutes, they’ll be down at the base of the cable lift and Logan will be gone. John can make his way out of the fall since he’s a survivor. John explains that when he’ll be questioned about the death, his people will manufacture another trigger, and blow up Las Vegas post bail. James will die, John says, and he won’t even know why he has been calling himself “Logan” for all these many years.

John strikes out at Logan with his claws. Logan ducks away, and John’s claws get stuck in the electrical wires! The lift drops down, and so do both John and Logan. They’re seen by the crowd below them. They land in the woods on top of each other, and Logan has accidentally impaled his claws through John’s stomach! With his final words, John says that he is glad that it happened this way. But he wants Logan to know that he had gotten more time to tell him about Rose. Logan screams. He can’t believe this! John says that he was always proud of his little brother Logan, and dies.

It’s starts to rain. Logan holds his now dead brother in his arms, while behind him lots of people with guns and a helicopter show up. But Wolverine doesn’t even care.

Retrieved from "https://heykidscomics.fandom.com/wiki/Wolverine:_The_End_Vol_1_6?oldid=1467961"
Community content is available under CC-BY-SA unless otherwise noted.