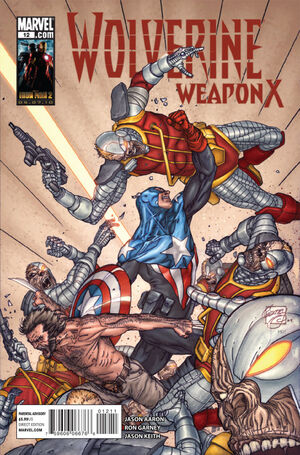 The time-twisting saga of the all-new Deathlok continues as Wolverine battles an army of cyborg assassins on two fronts: in the present, Logan must keep Captain America from becoming the latest casualty on the Deathlok hit list, while in the future an aging, battle-ravaged Logan leads a last-ditch effort to shut down the Deathloks once and for all.

Appearing in "25 Years From Now"Edit

Synopsis for "25 Years From Now"Edit

After invading the Deathloks' base, an aged Logan is neutralized by a Deathlok, melting him down to his adamantium skeleton. Bayer then leads her team in battle against the Deathloks, and is later informed of Wolverine's demise.

Retrieved from "https://heykidscomics.fandom.com/wiki/Wolverine:_Weapon_X_Vol_1_12?oldid=1657685"
Community content is available under CC-BY-SA unless otherwise noted.