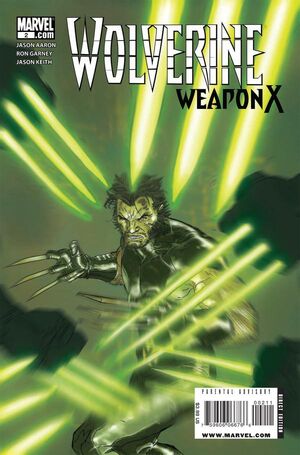 Ain't this a bitch. Some sort of energy blades. Feel 'em burnin' up my guts, scraping against my ribs. Guess this is what it feels like to be killed by me.

Melita Garner gets a mysterious call, and ends saying to herself there is a story here. Meanwhile, in Colombia, a bartender recognizes Logan. Logan then buys drinks for the whole bar. After leaving the bar and acting as if he was drunk. Logan then draws out two Blackguard soldiers and after a fierce battle, Logan finds himself surrounded by the rest of the members of Strikeforce X, and all 12 of them at that. Realizing it's a fight he can not win, Logan retreats to the cover of the jungle. The mercenaries give chase...but that's exactly what Logan wants them to do.

Retrieved from "https://heykidscomics.fandom.com/wiki/Wolverine:_Weapon_X_Vol_1_2?oldid=1467973"
Community content is available under CC-BY-SA unless otherwise noted.