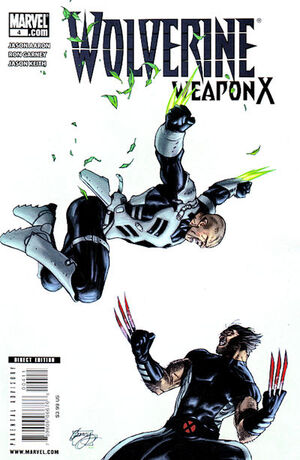 Somebody wake that bastard up...and tell him he's under arrest.

The red-hot, sold-out "Adamantium Men" storyline continues! Wolverine is intent on bringing down the evil corporation Blackguard, one executive at a time if he has to, but when he finally comes face-to-face with the man at the top, he finds the soldiers of Strikeforce X waiting for him, laser-claws and all. Can you say SNIKT? Part 4 (of 5)

Retrieved from "https://heykidscomics.fandom.com/wiki/Wolverine:_Weapon_X_Vol_1_4?oldid=1467979"
Community content is available under CC-BY-SA unless otherwise noted.