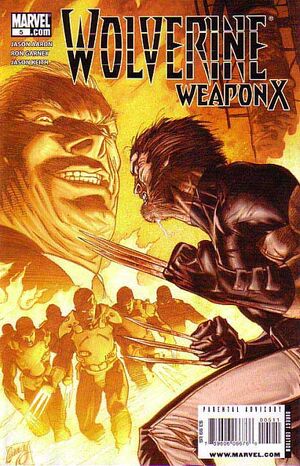 Logan is freed from HAMMER custody by an agent who has a history with himself and Maverick; Wolverine uses an assault chopper to attack the oil rig where Strikeforce X is hiding out and blasts them all out of the water; Blackguard loses its shot at a contract that would allow them to make adamantium soldiers for the government; Agent Jacks deletes the intel that Blackguard used to make Strikeforce X which gets her into very hot water with her boss, Norman Osborn; Maverick tracks down the man who sold the Weapon X process to Blackguard and takes him out.

Retrieved from "https://heykidscomics.fandom.com/wiki/Wolverine:_Weapon_X_Vol_1_5?oldid=1467982"
Community content is available under CC-BY-SA unless otherwise noted.