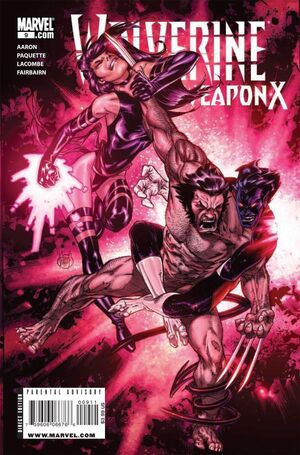 Appearing in "Insane In The Brain, Conclusion"Edit

In the crazed conclusion to "Insane In the Brain," Logan's stay in the whacked-out Dunwich Sanatorium finally comes to an end as his pals Psylocke and Nightcrawler show up to rescue him from the maniac clutches of Dr. Rot. But even if they can save his life, is it possible to recover what he's lost of his sanity?

Retrieved from "https://heykidscomics.fandom.com/wiki/Wolverine:_Weapon_X_Vol_1_9?oldid=1467991"
Community content is available under CC-BY-SA unless otherwise noted.