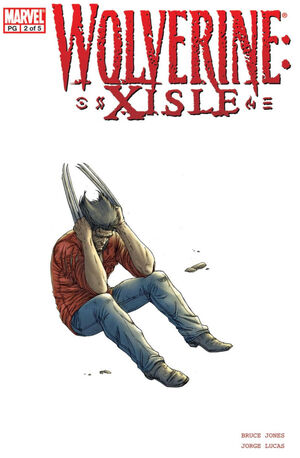 Damn... can't see jack in these woods! And I'm supposed to be the hotshot tracker...

Logan is laying on a beach. He wakes up and there is a forest in front of him and an ocean behind him. Near Logan there is something written in the sand, it says: Get out of this one wise-ass! and there is a footprint. Logan thinks that it is a joke and starts walking, he thinks he will find a restaurant and everyone will jump out and shout surprise. Logan walks around the island and comes back to the spot that he started at. Logan is just sitting on the beach, he tries to hit a seagull with a rock but misses, he says that he lost he throwing arm. He is then he is hit in the back of the head with a rock, he turns and there is a boy standing there. He asks the kid if he lives around there, and he says all his life. Logan asks where that is, and he hits Logan in the head with another rock and says the island stupid. Logan hears something and turns away from the kid, he throws another rock at Logan but he catches it this time, Logan hears some kind of music. The kid is watching the sun go down and tells Logan that he has to go cause he comes out at night. Logan runs after the kid but he is gone. The sun goes down and Logan goes into the woods looking for the kid, he finds some water and hears the music again and realizes that it is carnival music. Logan is walking in the woods trying to find where the music is coming from and hears someone following him. Logan is then attack my a giant monster, it hits him and sends him flying, Logan jumps to attack the monster put it is gone. Logan is sleeping on the ground, he wakes up and hears something, he follows the sound and finds a bar called The Riposte. Logan goes into the bar. No one talks to Logan in the bar, the bartender looks like the guy that was running the baseball throw at the carnival. The bartender say hurry and then something smashes into the bottles behind the bar, braking all of them. Logan is cut on his arm. Logan turns to see who threw the object but there isn't anyone there. The bartender says hurry again. The cut on Logan's arm isn't healing and Logan falls to the ground bleeding to death.

Retrieved from "https://heykidscomics.fandom.com/wiki/Wolverine:_Xisle_Vol_1_2?oldid=1468015"
Community content is available under CC-BY-SA unless otherwise noted.