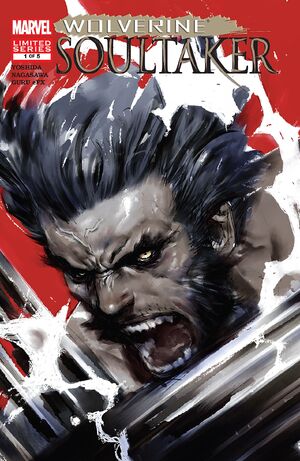 Not sure exactly what it was, kiddo. But it told me where to start looking for answers. Grab the mark and let's go. My friend got killed over this and I'm gonna see it through now. There's gonna be hell to pay!

Appearing in "Chapter One: The Mark of Mana"Edit

Would you like to see Wolverine fight ninjas and zombies? THIS IS THE BOOK FOR YOU!!!

Wolverine returns to Japan only to get caught in the middle of an ancient war between gods and demons!!

Can Wolverine tip the balance for good and save his soul, Japan and the world?

Retrieved from "https://heykidscomics.fandom.com/wiki/Wolverine_Soultaker_Vol_1_1?oldid=1466924"
Community content is available under CC-BY-SA unless otherwise noted.