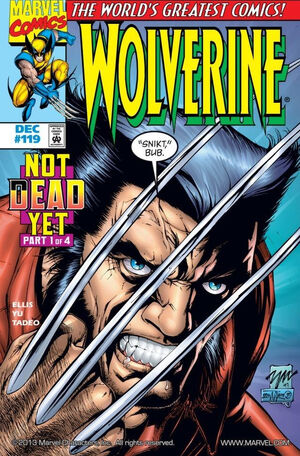 Appearing in "Not Yet Dead, Part 1 of 4"Edit

Synopsis for "Not Yet Dead, Part 1 of 4"Edit

Ten years earlier, Logan's arriving at Hong Kong and he's dating Ai-Chi Wong. Her father, Tak-Wah Wong, is a film producer. She's working for him as scriptwriter and Logan's becoming his consultant.

One month after his arrival in Hong Kong, Logan's meeting McLeish, a fifty years old hired killer, calling himself the White Ghost. This last's in fact hired by a concurrent producer to kill Tak-Wah Wong. McLeish's finally killing him three months later with his ivory knife. Logan's causing an explosion on a boat where he thinks McLeish dies.

Nowadays, in the East Village, Manhattan. While returning at his apartment, Logan's finding a killed homeless and an ivory knife planted on his bedside table. By withdrawing it, the x-man's arming a bomb. He's barely escaping the explosion : Logan knows that McLeish is alive and that he wants him dead.

Retrieved from "https://heykidscomics.fandom.com/wiki/Wolverine_Vol_2_119?oldid=1467212"
Community content is available under CC-BY-SA unless otherwise noted.