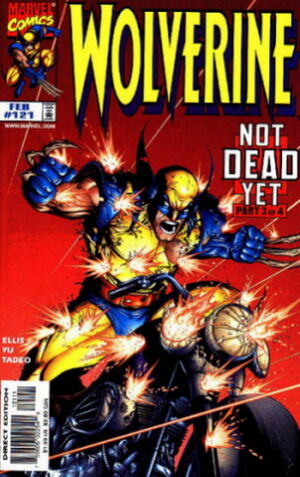 Appearing in "Not Dead Yet, Part 3 of 4"Edit

Synopsis for "Not Dead Yet, Part 3 of 4"Edit

Outside of Manhattan, Logan runs into a para-military crew hired by McLeish. After taking them out without killing them, Logan wonders how he should proceed. Deciding to take charge of the game, Logan chooses the woods over the road and continues on his path. In the woods themselves, Logan is greeted by the recorded voice of McLeish and in time, the dead body of Ai-Chia. Enraged, Logan yells out to McLeish that he’s going to kill him.

Retrieved from "https://heykidscomics.fandom.com/wiki/Wolverine_Vol_2_121?oldid=1467216"
Community content is available under CC-BY-SA unless otherwise noted.