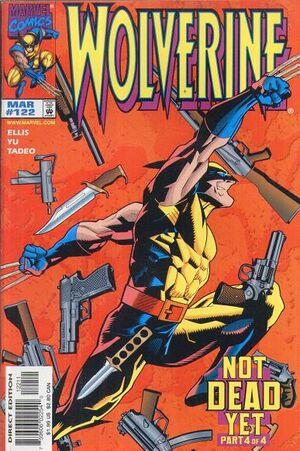 Appearing in "Not Dead Yet, Part 4 of 4"Edit

Synopsis for "Not Dead Yet, Part 4 of 4"Edit

In the woods, Logan makes his way to the cabins where, after killing some assassins, he learns that the voice he is hearing doesn’t belong to McLeish. It belongs to the son of the man who was killed when the boat that McLeish was on exploded. After killing him, Logan finds the man that caused all of his recent problems – McLeish. Logan proceeds to play mind games with him and eventually kills him. After burning his body and the cabin, Logan walks away. Some may say he’s no better than McLeish. He ain’t got an opinion on that yet.

Retrieved from "https://heykidscomics.fandom.com/wiki/Wolverine_Vol_2_122?oldid=1467218"
Community content is available under CC-BY-SA unless otherwise noted.