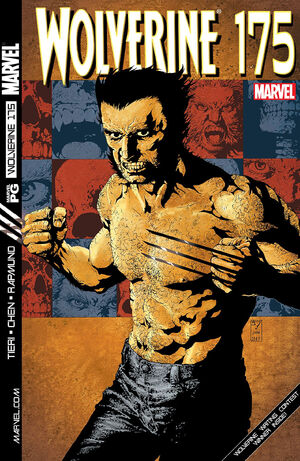 Appearing in "The Logan Files Conclusion"Edit

Synopsis for "The Logan Files Conclusion"Edit

Matsu'o sits alone and reflects on how Wolverine attacks him every year on the anniversary of death of Mariko, Wolverine's lover whom Matsu'o killed. Matsu'o shows all the body parts he has lost: left hand, right ear, nose and gall bladder. Matsu'o plans to ask Wolverine to allow him to take his own life and waits for the stroke of midnight. However, since he was "killed" in the previous story, Wolverine does not appear.

Appearing in "A Good Man"Edit

Synopsis for "A Good Man"Edit

Wolverine is on the run from local thugs when he comes across a woman who has a flat tire. He stops to change her tire quickly since he is being pursued. She thanks him tells him he is a good man. Wolverine denies it, but she asks him to pray. Unfortunately, Wolverine's pursuers arrive and kill her. Wolverine kills his attackers, gives the woman the best burial he can, and leaves the thugs dead in the street.

The story "A Good Man" was Jason Aaron's first writing assignment for Marvel after he won a writing contest.

Retrieved from "https://heykidscomics.fandom.com/wiki/Wolverine_Vol_2_175?oldid=1658614"
Community content is available under CC-BY-SA unless otherwise noted.