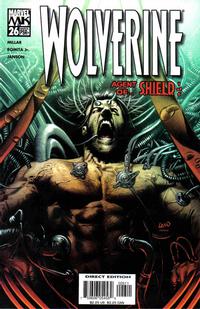 "AGENT OF S.H.I.E.L.D." Part 1 of 6 Wolverine may be back in S.H.I.E.L.D. custody, but at what cost? As the X-Men mourn their fallen team-mate in a funeral befitting a hero, Hydra celebrates the coronation of a new leader. And the reign of terror continues, as The Hand picks off the meta-humans, one by one… Will Wolverine be deprogrammed in time to stop the carnage? Plus, the secret origin of the Gorgon!

Retrieved from "https://heykidscomics.fandom.com/wiki/Wolverine_Vol_3_26?oldid=1731499"
Community content is available under CC-BY-SA unless otherwise noted.