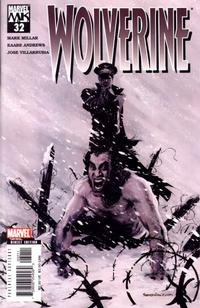 Mark Millar's epic 13-issue run draws to a close, but not before we bring him back for a spectacular encore, joined by Kaare Andrews (Eisner-Award nominated for his jaw-dropping INCREDIBLE HULK covers). This special 13th issue of Millar's WOLVERINE will be unlike anything you've seen from him before. A ghost story in the tradition of CREEPY and EERIE, this standalone issue is set in a World War II concentration camp and stars a feral character who looks like Wolverine, acts like Wolverine…but who is he really? The head Nazi running the camp is about to find out…or he'll die trying. Dedicated to the late, great Will Eisner, who had a hand in resolving this story.

Retrieved from "https://heykidscomics.fandom.com/wiki/Wolverine_Vol_3_32?oldid=1657815"
Community content is available under CC-BY-SA unless otherwise noted.