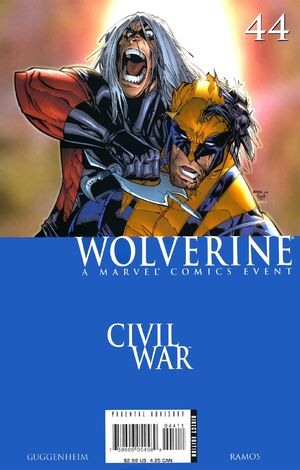 I figured I'd have to go in quick. Take him out before he could blow me up with that power of his. But then I noticed-- his hair's not on fire. And that flannel. Doesn't look like it's made'a unstable molecules. But the kicker was the cell phone he used. No way that survives the blast unless there's asome kinda safety zone around him that's not affected by his power. Like the safest place is inside the eye of the hurricane.

Revenge is a kind of wild justice, which the more man’s nature runs to, the more ought law to weed it out.

Retrieved from "https://heykidscomics.fandom.com/wiki/Wolverine_Vol_3_44?oldid=1657822"
Community content is available under CC-BY-SA unless otherwise noted.